The WSU School of Design and Construction welcomes Kristina Borrman to its faculty.

Borrman comes to WSU from Syracuse University, where she has taught architecture history and theory. Her area of research is in the construction of social identity, including race, gender, and class, in the built environment. In particular, she has studied historical efforts by American architects to promote social justice through design.

Borrman is writing a book on the history of desegregation in the US before 1965, examining how architects and social scientists pioneered research in desegregated housing. In fact, architectural studies of successful desegregated public housing projects became evidence that the NAACP used in the famous Brown vs Board of Education court case that dismantled racial segregation in public schools in 1954.

“I’m exploring the little known role that architects played in the struggle against segregation in the US,’’ she said. 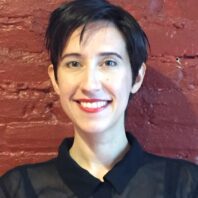 At WSU, she will be working with the School of Design and Construction’s Diversity, Equity, and Inclusion Committee. In conversation with her new colleagues, Borrman hopes to explore the role of social justice in SDC curricula and pedagogy. “Designers aren’t just professionals in training. They’re also citizens in training,” she said.

“I believe that reasoning through design is a mode of knowledge production that is powerful. I am intrigued by the speculative nature of design—the radical potentialities that designers imagine and communicate. For this reason, I have dedicated my career to learning about the role of design in social transformations. I remain curious about the ways that architecture, real estate, and social identity are mutually constituted and I look forward to continuing this investigation in my teaching and research,” she explained.

Borrman came to WSU as part of the inaugural cohort of WSU’s Racism and Social Inequality in the Americas cluster hire program. The program was initiated to address systemwide needs for scholarship, teaching, and outreach aimed at dismantling systemic racism and to recruit and retain a more diverse faculty and student body.