The consolidation of the four disciplines into one general geographic area of campus began officially in the Fall of 2012 with the closure of the Interdisciplinary Design Institute at WSU-Spokane; the physical transfer of the Department of Landscape Architecture from Johnson Hall in the central area of campus; the move of the Department of Interior Design from WSU Spokane and the Engineering Laboratory Building into Carpenter Hall and Daggy Hall; and the re-naming of the school as the School of Design and Construction.  All four programs have lengthy histories at Washington State University, and they retain their independent status as professional, accredited programs that must abide by standards set by their various accreditation bodies (NAAB, CIDA, LAAB, and ACCE).  Over the years, the school’s disciplines have existed variously as courses, programs, and departments under colleges with shifting titles.  The information below briefly describes the disciplines’ histories at the state’s only land-grant institution; more detail is available in the sources listed in the footnotes. 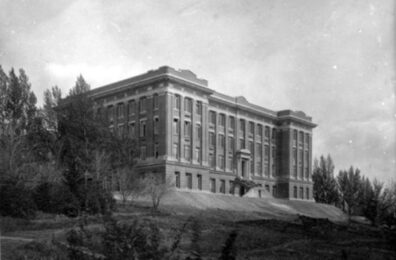 Carpenter Hall, where the Architecture program has been housed since its inception, was designed by Rudolph Weaver—the university architect and first chairperson of the department—and dedicated as the “Mechanic Arts” Building in 1915 at a cost of $150,000.  Because of wartime restrictions, it was not fully completed until 1926.  In 1949, the building was renamed “Carpenter Hall” in honor of H.V. Carpenter, the first dean of the College of Mechanic Arts and Engineering.[1]

With its exterior detail looking broadly to the Renaissance and a grand (albeit never completed) classical entrance facing towards the city of Pullman, Carpenter Hall helped to architecturally elevate the technical field of “mechanical arts” as a subject of higher learning at the state’s land grant institution.  Replacing the older “Mechanical Hall” which was constructed nearby in 1893 shortly after the college was established, Carpenter Hall—originally the Mechanic Arts Building—helped usher in a new era of design at the college that lasted through the 1930s.  It was at this point when campus buildings began spreading outward from the core and what had become a tradition of red brick design began to look more consciously to revival periods in American architecture.

To help provide the design refinement for a building that originally housed the college’s disciplines in engineering and architecture, Weaver provided Carpenter Hall with a tripartite elevation on its public facades to the west, north, and south, with distinct features mimicking the base, shaft, and capital of a classical architectural order.  To this end, the building originally featured rusticated sandstone marking the ground floor (or base); a three-story giant architectural order in the form of a Doric pilaster delineating floors two through four (or shaft); and a brick and terra cotta cornice marking the roof (or capital).

Weaver’s architectural contributions at what was “Washington State College” were influential to future campus design.  His instructional methods—which combined traditional design based upon fine drafting skills with a working knowledge of the business of architecture and the basic principles of construction—ensured that students would not forsake the pragmatics of building for exquisite design, and vice versa.  In many ways, this could be understood in relation to Weaver’s design for the Mechanic Arts Building as well as President Enoch Bryan’s vision for the college, which was to elevate the practical fields as examples of higher learning.

In the early 1990s, the four-story Renaissance-revival building underwent an extensive interior renovation process during the height of a stylistic architectural postmodernism.  The project was led by the Seattle-based firm of NBBJ and under the principal design direction of Dorman Anderson, who graduated from WSU’s Architectural Engineering program and taught at WSU from the late 1960s and early 1970s.  In the renovation, the building’s basic interior configuration of broad corridors linking open studios on the north and south wings was retained on floors two through four, but abstracted versions of classical features—such as broken pediments and column capitals– were added to support structures in common spaces and offices on floors one and five.  The fifth floor, added as part of the renovation, includes the majority of these features, many of which are visible in a conference room that looks over the city.

Since that time, the original terra cotta cornice has been replaced with a fiberglass cornice of similar specifications and the partially-built original staircase intended to lead to the grand, second-floor entrance on the west façade has been removed in favor of ground-level entrances at the west, south, and north sides.  Yet the original classical entrance portico still remains on the second floor, and for the most part the façade retains its original condition.

The majority of the school’s faculty and staff offices are in Carpenter Hall, as well as its IT office.  The closure of the school’s library on the first floor in 2010, however, and the subsequent removal of books and periodicals to the Owen Science and Engineering Library opened the space for design studio and classroom use.  In 2014, a generous gift from Kiewit Corporation assisted the renovation of the construction management classroom, room 220, into a first-class instructional space, and further gifts from alumni and donors helped build a virtual laboratory for industry and professional engagement, as well as instruction, for room 412 in 2017.

Daggy Hall was completed in 1973 by Fred Bassetti and Co., headed by the prominent northwest modernist architect Fred Bassetti, who designed the brick structure—as with many of his campus housing designs elsewhere in Washington—in the mode of an informal, rambling medieval hill town.  The building’s interior is interspersed with narrow corridors suggesting alleys and urban passageways while internal balconies and a two-story atrium courtyard suggests an indoor piazza.  The building was originally designed to house the university’s speech facilities and was named for Maynard Lee Daggy, who headed the state college’s speech department from the 1920s through the 1940s.  Other departments joined the building’s spaces over time, including the theater department and faculty and staff administering the first two years of the interior design program.

Daggy Hall served these functions until 2008, when state budget considerations necessitated the closure of the theater department.  The speech and hearing clinic, which had been housed there, later transferred to WSU Spokane, and with the creation of the new School of Design and Construction in 2012, studios, classrooms, laboratories, offices, and storage opened up to the school under the auspices of VCEA.  Perhaps the most significant addition of new space in both square footage and use resulted in two spaces that have been converted into the School of Design and Construction shops, also known as the “Fabrication Laboratories” or “Fab Labs.”  Fab Lab I (Daggy 253) is dedicated to full-scale prototyping, including furniture design, set design, and architectural design/build.  Equipment includes a CNC router, a thermal vacuum forming machine, a vacuum lamination machine, a complete suite of industrial woodworking machines, and an extensive number of hand tools.  Fab Lab II (Daggy 257) is dedicated to smaller-scale prototyping and physical modeling.  Equipment includes laser cutters, desktop 3D printers, a suite of model-scale woodworking machines, and many hand tools.  The Fab Labs are vital to school operations, with faculty from the design disciplines regularly encouraging student use and a busy staff, comprised of one classified staff member and teaching assistants, trying to keep up with student consultation and assistance.

The school has made excellent progress to deliver on its integrated mission by gradually mixing disciplines in studios and classrooms; transforming the Carpenter Hall first floor gallery into an active, rotating space showcasing a diverse range of work from students, clubs, faculty, alumni, and the professions; and slowly breaking down disciplinary barriers through faculty office distribution pending retirements or new assignments. 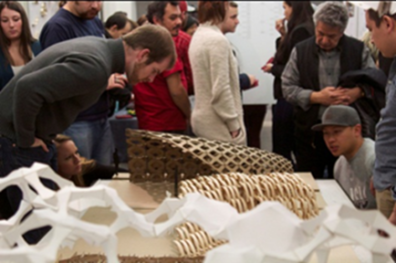 The program in Architecture was the first architecture program established in the state of Washington, and the oldest of the four disciplines in the School of Design and Construction.  The program existed informally beginning in April of 1907, and became more official following the graduation of its first student, John Clyde Patterson of Olympia, in 1913.  Patterson’s Bachelor of Science degree was the first professional degree in architecture awarded in the state and region.[2]  Originally affiliated with the Department of Mechanical and Electrical Engineering as early as 1911, the program in Architecture became its own department in 1915 and was later incorporated, under President Ernest O. Holland, within the newly established College of Mechanic Arts and Engineering in 1917.[3]  The program has been housed in H.V. Carpenter Hall since its completion in 1915.

In the late 1990s, curricula leading to a Master of Architecture (M.Arch.) degree was initiated and the department—which became a program when it merged with Construction Management to form the School of Architecture and Construction Management in 2000—graduated its first student in 2001.  The M.Arch. degree was fully accredited by NAAB in 2004 and the program began phasing out the five-year B.Arch. degree at that time.  The program launched a new one-year accelerated curriculum leading to the accredited master’s degree in 2014, and graduated its first cohort of eight students in 2015.  The program in Architecture received a full six-year accreditation by the National Architectural Accreditation Board (NAAB) in 2008 and the new eight-year maximum accreditation in 2014.  The program will next undergo accreditation in 2022. 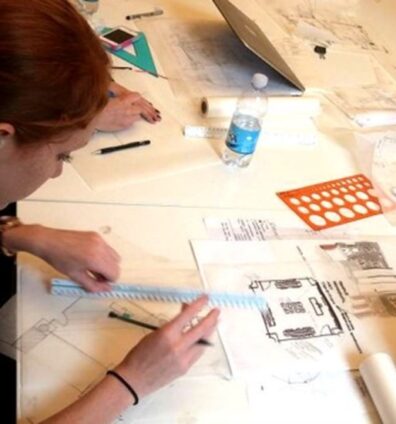 The Interior Design program, as with the other disciplines in the School of Design and Construction, is tied to the land grant mission of the university.  Interior Design at WSU dates back to the early twentieth century, as the program emerged from the Department of Domestic Economy (established in 1903 under President Enoch Bryan) which became the College of Home Economics (established in 1916).  The college—first in Morrill Hall, then in Van Doren Hall, and then in White Hall—was the first of its kind in the nation.  There is evidence that undergraduate student theses delved into issues of interior organization, decoration, and planning as early as 1918, but the formal establishment of a program in “Interior Decoration and Home Planning,” separate from clothing and textiles; home economics; and food and nutrition; emerged in 1938 when the College of Home Economics split into six departments.[5]

Over the past 100 years, interior design studios and classrooms have occupied White Hall; Commons Hall; the Engineering Laboratory Buildings; Phase I and South Campus Facility buildings at WSU Spokane; Daggy Hall; and Carpenter Hall.  The Interior Design program was most recently accredited by the Council for Interior Design Accreditation (CIDA) in 2016, and will undergo another accreditation process in 2022. 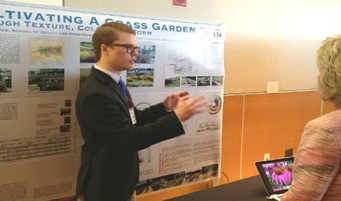 The Landscape Architecture program established its roots on the Pullman campus in 1893 with course offerings in landscape gardening and floriculture within the Department of Horticulture—one of the first departments at the new Washington State Agricultural College, Experiment Station, and School of Science (later Washington State College).

The first official landscape architecture faculty member was hired in 1949 and a four-year Bachelor of Landscape Architecture (BLA) degree was accredited in 1973, housed within the Department of Horticulture and Landscape Architecture.  In 1995, the Interdisciplinary Design Institute (IDI) was established at WSU Spokane, the BLA degree become a five-year program, and students spent their fourth year of study, and optionally their fifth year, at the IDI.  In 2009, in response to an economic crisis, the program reverted to a four-year degree and all undergraduate courses were held exclusively on the Pullman campus in Johnson Hall.  In 2011, the IDI was closed, and the program became part of the newly established School of Design and Construction.  The Landscape Architecture program was most recently accredited by the Landscape Architecture Accreditation Board (LAAB) in 2013, and will undergo accreditation again in 2019. 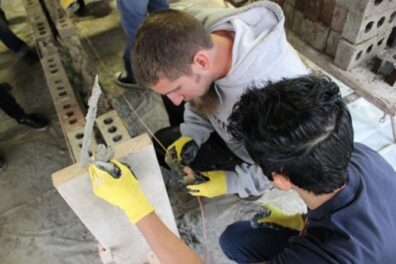